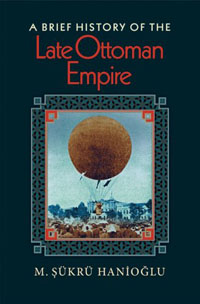 The main event dates back a century, the revolt of the Young Turks, and the chosen time covers almost two and a half centuries, the late Ottoman Empire. Surveying its history, Princeton's scholar M. Şükrü Hanioğlu proposes a new approach how to integrate the knowledge of multiple subfields into a more general framework. Before his method and conclusions are touched here, a word about the contents. Finally follow two thoughts.

M. Şükrü Hanioğlu, who became well known also by his book on the "Young Turks In Opposition" (Oxford 1995), outlines six chapters between introduction and conclusion for events from 1798 to 1918. At first he deals with the Ottoman Empire at the turn of the nineteenth century. Then he discusses in the next two parts the initial Ottoman responses to the challenge of modernity and the dawn of the reform age. The remaining three parts shed light on the Tanzimat era, the Hamidian regime and the longest decade of the late Ottoman Empire from revolution to imperial collapse. Hanioğlu's tips for further reading in major European languages are very helpful as well as the bibliography and index.

Regarding narrative and methods, the author emphasizes historical trends and processes more than single events. This makes his book an outstanding and interesting read for the students and general public. Solidly based on the author's gleaning of major imperial and other archives and on his rich insights into the Afro-Asian and European history, his aim is not the usual happiness of a historian about dozens of more details in the great Ottoman mosaic. Rather he walks a golden path on ridges in the hilly landscapes filled with valleys of details.

Hanioğlu underscores four principal dimensions. In the first one he uses the paradigm of the old fight between the imperial drive to centralize and a variety of centrifugal forces. Thus, he enables the reader to compare with other multiethnic empires like the Austro-Hungarian, the British and the Russian Empire. Second, he concentrates on the struggle between center and periphery. True, the reader who is now more used to the paradigm of globalization, might ask here if the Arabian Peninsula was a semi-periphery. Or how the paradigm of center and periphery fits into concepts of historical regions which allow us to visualize the trends on local, regional, national, and global levels. The reader will find the center-periphery approach enlightening for it appeals to the classical narrative of empires.

Third, the author avoids the "worn-out paradigms of modernization and Westernization" (3). Instead, he tries to write in terms of the Ottoman response to challenges brought on by the onset of modernity. He has a point: the Ottoman state was not unique in adapting to modernity. Though its task was perhaps more arduous than that of European states, if only the modernity was initially a European phenomenon. Having said this, he opens yet a rear window for that paradigm since there is no way getting around of all the different attempts for an Ottoman and Turkish Europeanization as kind of Westernization. Finally, M. Şükrü Hanioğlu portrays the Ottoman history as an integral part of the larger histories of Europe and the world. Therefore, he shows no fear of reviving an out-of-fashion area: diplomatic history. In his case, as historian of the Near East, he is excellently equipped to work in his multiple regional languages with fine tuned tools in a wide range of methods.

Now regarding the conclusions. The author notes that it was Muhammad Ali of Egypt as an example where the periphery tried to impose the modernization to the center. Two decades later, in 1839, roles were reversed. Not everything in the fight of centripetal and centrifugal forces was related to nationalism. The author draws a dynamic picture also for Ottoman reactions to modernity. Since the empire began its journey later than most of its European counterparts, it had to rely more on imitation and importation. Europeanization was a kind of Westernization. So he refuses simple notions like a struggle of modernizers against reactionaries. The author shows: it was even for (Pan-)Islamists more complex.

A fundamental dynamic of the late Ottoman history leads to the great role of the old-style diplomacy in mitigating foreign influence over domestic developments. The Ottomans succeeded to deflect European demands only to a limited degree. Thus, Hanioğlu says, "the domestic policy in the late Ottoman Empire was related to foreign policy to an extent unparalleled before" (205): it was the state's relations with European powers that provided the initial and sustaining impetus for reforms aiming at centralization and modernization. In other words, it was an outward determined, though inward guided process of change. Its major impetus came from the Ottoman military since old armies were of no use on the battle fields against the ever growing might of the Europeans.

According to the author the Eastern Question was like a chameleon changing its colors with the environment. Indeed, this book refreshes greatly the further discussion. First, we can distinguish four phases of that question as a result of the: Ottoman's rise; their short equal stance with others about 1774; their decline and their collapse. All Ottoman phases had regional versions. The fourth one for instance grew also to a domestic and a foreign Middle Eastern Question: which Arab tribe would fight the Ottomans to leave the empire by allying with which foreign power? And from the outside: which European rival would support whom and inherit which parts of the falling empire in Southern Europe, North Africa and West Asia? Similar points were risen by other major ethnic groups like the Armenians, Greeks, Jews, Kurds, and some Iranians. Today grows an European inversion out of the Eastern Question that moves some restless Muslim spririts still as minorities of Europe: with whom to ally at the Islamic center in the Middle East, at the Western semi-periphery of the Americas and at the densely populated Islamic periphery of Africa and Asia?

Second, Middle East historians share the notion that there was in Europe and around the Ottomans a "balance of power." Was there ever one or rather a "dynamic imbalance of power?" With the latter as paradigm, change and instability can be better explained. Also Germans and Ottomans shared a "feeling of being surrounded." As count Hermann von Schlieffen stressed: "unprotected in the middle, surrounded by walls and trenches of the others." Otto von Bismarck spoke of three potential warfronts and the need for coalitions to avoid them. By establishing a power sufficient to oppose her potential three foes all together, Germany provoked each one of them alone into viewing her power as too great. So an arms race among the four, plus economic instabilities, generated a steady dynamic imbalance of power. As Ottomans modernized, they slipped in a similar situation, though not of might but weakness. Ottomans pitched others against each other. So the German-Ottoman pact (175) in the Great War came from Turkish entreaties and German designs. [1]

Hanioğlu's seminal work presents a true spring of ideas not only for the late Ottoman history but also for the search of some earlier East Roman and Byzantine interplays of structures and identities.