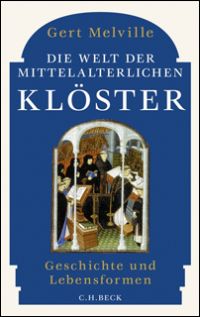 In his overview of Christian religious orders, Gert Melville follows the chronological development of communitarian and solitary life from its inception to the eve of the Reformation.

Chapter 1 (Die Anfänge) deftly traces the late antique development of clerical communities by bishops, hermitages by ascetics, and cenobitic monastic communities subject to written rules, and follows the appropriation of these systems into merovingian Gaul, noting the influence of Irish monks on the continental church.

The Benedictine tradition is treated in Chapters 2 (Die Benediktsregel und ihr Fortleben) and 3 (Die Benediktinische Blüte). An evalution of the Rule of Benedict, its "discretion" and the effect of its exclusive imposition by Louis the Pious and Benedict of Aniane, is followed by accounts of the inevitable decline suffered under the Eigenklöster system, and the "new beginnings" in 10th century Burgundy. The author then appraises the claustral benefits of the libertas granted reform abbeys in countering the avaricious grip of landowners, and the monks' prudence in safeguarding their freedoms with carefully crafted customaries, an expanding confederation of allied priories, and direct ties with the See of Peter.

The next two chapters (4: Rückkehr in die Wüste and 5: Die Regularkanoniker: Ein neues Selbstverständnis des Klerus) cover late 11th and early 12th century renewal movements. Still greater freedom was claimed by small bands of monks modelling their lives on Scripture and what they knew of the desert fathers, by charismatic preachers who gathered their followers, both men and women, into communities, but usually did not join them there, and by clergy who reclaimed community life in orders of canons regular, adopting the "Rule" of Augustine and adapting it to their particular needs by customaries or constitutions. The advantages of this broad exemption from lay control was not lost on reform minded hierarchy in the wider Church (Amtskirche), nor were abbots blind to the pastoral obligations imposed by communities of women.

The Cistercians come under scrutiny in Chapters 6 (Die Zisterzienser: Kollegialität statt Hierarchie), 7 (Der Erfolg des zisterziensischen Modells) and 8 (Vielfalt und Konkurrenz). Cîteaux's rapid expansion from one of many small reformed monasteries to a european-wide "Order" was due, Melville argues, not only to the rising piety and population of the age and the charismatic personality of the ubiquitous Bernard of Clairvaux, but to the White Monks' unique consolidation of benedictine autonomy and claustral interdependence. Their system of filiation, born of a fascination with logic and the rule of law, superseded the feudal model of Cluny and its federated houses. The adoption or adaptation of the Cistercian model by Praemonstratensian canons regular, Gilbertine mixed communities, Savigniacs and other groups absorbed by the Cistercians testify to its efficiency - as does the appropriation of selected aspects of it by the pre-existing Carthusians and Cluniacs, and as does its imposition on all religious congregations by IV Lateran in 1215.

New orders also arose from a literal application of long-held images of monks as milites Christi and penitents. Military and hospitaller orders and, especially in the Empire, penitential orders expanded the diversity of religious orders, as was described and deplored in the 12th century Liber de diversis ordinibus et professiobibus qui sunt in aeclessia. This expansion also posed a challenge which the monarchical papacy attempted to control, but could not stem.

Chapter 9 (Neue Glaubenskonzepte) looks at the effect a popularized monastic piety had on the laity and the formation of lay "communities" tangentially subject to tightening ecclesiastical regulation. Some, like the Waldensians, were condemned as heretical; others, like the Beguines and Humiliati, scrutinized with suspicion. In the increasingly urban society of the 13th century the public face of regular life became the mendicants who preached to the laity, taught the clergy, and incorporated into their orders not only nuns but tertiaries living in "the world".

In Chapter 10 (Die Franziskaner: Ein Bettelorden mit der ganzen Welt als Kloster), Melville relates the dramatic conversion of the free-spirited Francis of Assisi and his zeal for preaching God's love to anyone who would listen, and the expansion of his band of "little brothers" and their mission. He also highlights the direct ecclesiastical oversight required by the hierarchical church, and the abandonment of the absolute poverty he prized for modifications welcomed by the friars' leaders but rued by Francis and resisted by Clare of Assisi.

The history of the contemporary Dominicans is then surveyed in Chapter 11 (Die Dominikaner: Heilige Predigt und Seelsorge). Unlike Francis, who composed and revised his own Rule and prized absolute poverty, Dominic accepted mendicancy as an expedient and conformed to the canons of IV Lateran in accepting the Rule of Augustine. Constitutions supplemented the Rule and fostered the mission of learned preaching and teaching from which his followers took their name, Ordo predicatorum.

Still other mendicant orders were formed in response to societal changes. Those that strove to combine contemplative solitude with pastoral work are examined in Chapter 12 (Transformationen eremitischer Gruppen). After being given a vitae formula by the sympathetic latin patriarch of Jerusalem, hermits of obscure origin living on Mount Carmel formed the Carmelite Order and in the aftermath of the crusaders' defeat at Hattin migrated to expanding European cities. Slightly later, the "Augustinereremiten" were organized, accepting the "Rule" of Augustine and, again, adopting their own constitutions. Among the many less well known and less successful orders were the Wilhelmiten, Hermits of Toscana, and Johannboniten.

Aspects of the intellectual life and mounting complexity of late medieval religious life are touched on in Chapter 13 (Ein neuer Abschitt der vita religiosa). An overview of the long tradition of monastic historians and the emergence of millenarian theories of the "Age of the Spirit", and the personal Revelations of Brigitte of Sweden, give good insight into the accelerating individualism of the late Middle Ages, just as the abdication of Celestine V and the quiet retreat of the devotio moderna illuminate a rising pessimism and anti-clericalism.

The coeval frustrations and splintering within religious orders is covered in Chapter 14 (Bettelorden im Konflikt: Armutsstreit und Observanzen), which chronicles the re-eruption of conflict over Franciscan evangelical poverty and the excommunication and anti-papal pamphleteering of the conservative "Spirituals". Chapter 15 (Reformer und Reformen im ausgehenden Mittelalter) contrasts the less scandalous "top-down" attempts at monastic reform by Benedict XII, and the "bottom-up" renewal measures implemented by monks and mendicants themselves even as the Latin church itself fell into schism.

Melville stops short of the Reformation to take a quick look back at the role religious orders played in maintaining the unity of the medieval Church (Chapter 16: Rückblick) and describes the basic structures of the vita religiosa (Chapter 17: Grundstrukturen der vita religiosa im Mittelalter), pulling together the many threads he had woven into previous chapters. Over long centuries, he points out, religious acted not only as the conscience of society, but as havens of stability, keepers of records, preservers of books and contributors to the development of an ordered, law-based society.

To his great credit, Melville has integrated religious women into the mainstream of claustral history rather than relegating them, as many have done, to a single short chapter, thereby segregating them from their brothers and from the flow of history and mentality.

More than writing an introduction to the world of the cloister, Professor Melville has situated monastic and religious life within the history and ever-changing thought world of medieval Europe and produced both an overview and a reference work. In fifteen chronologically-ordered chapters he traces claustral aspirations and failures from early ascetic singularity to late medieval plurality, and provides a retrospective summary on the influence of religious in forming and mirroring shifting pieties and politics over 1200 years. His final chapters summarize the indelible imprint of claustral life on medieval and subsequent European society, and appendices containing a helpful chronological table, bibliography, and indices of persons, cloisters and religious orders facilitate finding specific information.